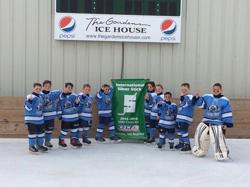 The Piedmont Predators Mite Sky dominated the competition during the 2014 U.S. Eastern Regional Silver Stick Tournament with an impressive 5 wins and no losses. The littlest Preds were impressive posting two shutouts during tournament play and earning a bye as the first place team netting 60 goals for while allowing just 19 goals against.

Get your free Kids Guide to the Tokyo Olympics. Over 100 pages of games, puzzles, trivia and more!Download